With the Nintendo Switch being released this year, many fans have been eager to see the new IP that will come with the system. For the Wii U, it was Splatoon. For the Switch, it will be Arms. Nintendo recently had a direct that almost completely focused on the new IP that will be released next month, June 2017. This is following Nintendo Switch‘s current trend of releasing a large name title each month. Here is a summary of everything that was announced for Arms.

From the Direct, the story mode seems fairly simple which is a good move for a new IP. Basically, the fighters are aliens with no memories and stretchable arms. The aliens have taken a liking to use it for combat and a Grand Prix was created to find the best fighter. It is silly but for a Nintendo fighter, it’s perfect.

Arms have different weight class varying from light>medium>heavy. Lighter equals faster blows but heavier means more damage which is a pretty straightforward system. If they are the same weight as the opponents, they clash. There is a emphasis on dodging. There are 7 different attributes. Each arm has one and when charge, unleash a special effect on the enemy fighter.

Note that all ARMS’ attributes only activate when they are charged. There are over a 1000 variations players can choose. Source: Nintendo Subreddit

Effect: Causes both of the opponent’s ARMS to become inactive

Effect: Causes the opponent to soar through the air in the opposite direction of the impact; cause knockdown on landing; can still hit opponent while being blown away

Effect: Causes all actions from the opponent (besides blocking) to cease; also immobilizes them for a very short time

Effect: Causes a second hit with an area of effect explosion after a small delay; causes instant knockdown; if hitting a shield, will cause it to drop automatically (unsure about this part)

Effect: Causes the opponent’s screen to be covered, blocking sight, for a short time

Known ARMS with this Attribute: Blorb

Each character has signature arms but can be swapped out with any variation. Your right and left arms can be different types as well.

Spring Man: Main character that is popular with kids

Mechanica: Smart girl who made her own fighting robot

Master Mummy: Unique tank character that has a tragic back story about his family

Kid Cobra: Snake skateboarder with a unique circular bottom half.

Ribbion Girl: Singing idol with a triple jump! Other main character as she is on the box art.

Byte and Bark: Patrol cop with a dog partner. The dog will fight and can be used as a jump platform. Unique 2v1

Twintelle: Besides her large behind, she is a pigtail stylish fighter.

There are a variety of different game modes which is great for players who don’t want to play online ranked matches and just want party games. These are also part of the single player Grand Prix mode which adds a variety to just simple fights.

Team fight: A unique 2v2 mode where allies are chained together. You can combine your strikes but you can also strike allies so teamwork and positioning are key. You can also be damaged together if the enemy attack effect is large enough.

V Ball: Volley ball where fighters use their arms to strike the ball to earn points. The ball explodes and the stretchy arms adds a unique perspective.

Skillshot: A break the target game mode with an emphasis on speed and strategy. definitely a great training tool.

1 on 100: Very similar to Smash version where you fight 100 generic enemies that are easy to defeat.

Arm Test: To obtain all the different arms in the game, you collect currency and bet it into a system. You try to earn as many points as possible to obtain a random arm. You can obtain duplicates. Obtaining duplicates actually increase the damage of the arms itself which helps with the annoyance of random generators. I am personally not a fan as I would want to simply use the in-game currency to acquire different arms.

Grand Prix: 20 straight matches very similar to an arcade mode. There is a final boss but was not revealed. You can play with a friend as well.

Party Match: You can play online and challenge one another in the multiple game modes listed above. The lobby can handle up to 10 Nintendo Switches which means up to 20 players. (Each players uses the two switch controllers on the console itself to play)

Ranked Matches: 1v1 ranked system where level increases based on wins and drops based on losses. No word whether arm variations can be used. This can create an issue with balancing as there is no way to predict how the enemy will fight. Since there is such a large variety of arms that can be equipped, the potential for overpowered combinations are high.

Local Multiplayer: A wireless LAN mode where up to 8 consoles can be connected in one lobby. It can host up to 8 players.

There are free updates to the game. This includes fighters, stages, and arm variations. This is a great move by Nintendo as many modern fighters often have DLC characters announced before their games are released. With free updates, new players don’t have to worry about paying more and encourage them to keep playing for future updates. 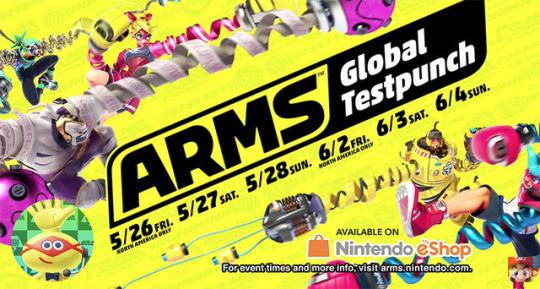 Above are the free online demos that you can download from the Nintendo eShop. Be sure to come back and check when you can try out the game.

This is a new part I want to add to make these blogs feel more personal. Please let me know if you think these parts are interesting or should be changed or removed.

Overall, I am excited for Arms. It’s definitely a big step to create a new IP especially when it comes to Nintendo and fighting games in general. It’s hard to find new audiences with these types of game but with the variety of game modes and party type option, I think casual players can into the game. The ranked versus is a big worry. Having too much variation throws off balancing greatly. If Nintendo hopes to break into the e-sports scene, having balancing issues will prevent it from becoming a main stage fighter similar to Mortal Kombat, Street Fighter, or Marvel vs Capcom.

For fans of the Splatoon series, Nintendo also revealed more single player story during the direct. The return of Marie is shown and your character doesn’t seem to know her. She also does not have her sister, Camilee. In the single player mode, there is platforming, environmental hazards, new enemies, and of course, new guns. Splatoon 2 will be released July 21, 2017.

If you want to watch the Direct itself, the link is here!