Video game streaming has become a bigger entertainment on the internet. There are so many different games to watch, personalities, and styles of playing. As game streaming has become more popular, more alternate streaming sites have showed up. YouTube Game Streaming has been around for a few years but recently Google shut down YouTube Gaming because it confused users. Facebook Gaming is the newest competitor and it can connect already fans of the games to streamers. Twitch, which is owned by Amazon, is the most popular service. Most of the audience data comes from StreamElements. StreamElements is a new growing streaming service. It started back in late 2017 and it allows streamers to show games through multiple channels; including Twitch, YouTube, and Facebook. It also has a professional interface and helps provide useful data to streamers.

Who has the biggest audience?

According to the Wall-Street Journal, Twitch maintains the highest amount of game audience with 70% of hours watched among all services. 2nd is YouTube which had 19.5% of audiences according to StreamElements. Facebook Gaming has approximately 5% while Microsoft Mixer has 3%. 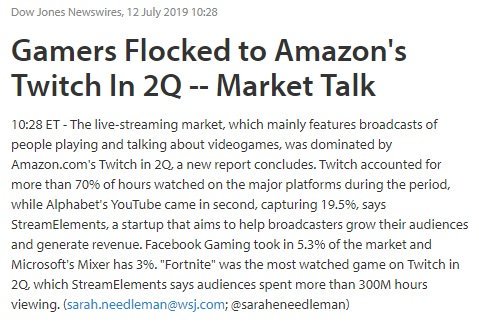 It will be interesting to see if the other platforms can take more of an percentage from Twitch. The platform still has the easiest streaming service, search functions, and most importantly: a dedicated gaming audience. While there are many people use YouTube and Facebook, a huge percentage aren’t dedicated or people who enjoy games. Twitch started with a core audience in mind and has continually improved their services for viewers. Many online personalities also have their core audience on Twitch. Unless the company does something horrendous that would deter the personalities, I think Twitch will remain top dog.