Anthem has some problems with its community. Early during the game release, players were unintentionally joining raids far beyond their levels and also shutting off PlayStation 4 devices. A new issue has arisen with EA Bioware making changes to the loot system within Anthem.

In Patch 1.03, level 30 players will no longer receive common or uncommon loot. In plain view, this seems to be a great option for stronger players; however, it is still extremely exhausting to earn legendary or master tier items. Some players on the Reddit have reported that they have played over 60 hours in Grandmaster without receiving any significant loot. Players are frustrated as Anthem, at its core, is a loot based shooter similar to Destiny and Warframe. They feel as though their time is wasted.

You’re Pissed? You want to make a point once and for all? Well, what could hurt a game that has Real Money transactions for cosmetics (lol, yeah there are nearly none i know) or is a live service more than anything? Get your point across, simple as that. Stop Playing the game for a whole Week (Hopefully with the support of the entire Subreddit) to show BioWare that all it’d take for us to really enjoy the game, is to receive loot.

This protest is good for Ubisoft as The Division 2, another loot-based shooter, releases this week. The protest is already making waves. EA Bioware’s Head of Live Service for Anthem tweeted:

In the next few months, we’re expecting to make significant changes, but we’re starting with some incremental ones so we can better navigate that evolution. Our goal is to ensure the best possible player experience.

Player feedback is key, especially to modern loot based games. For example, Star Wars Battlefield 2 by EA is now much better received after the huge outrage from their loot box systems. The game has removed all aspects of  Ubisoft’s For Honor was also being boycotted by their player base during its launch. Their protest caused Ubisoft to quickly change their game rewards and increased in-game currency earnings by 25%.

Hopefully, EA Bioware makes these changes soon. Anthem has received mixed reviews and the spotlight on them is making the game look worse. While I personally don’t own the game, I don’t want the game to be awful for its community.

Anthem has been out for almost one month and it’s been receiving average reviews. The Metacritic score is 60%.  Players note the similarities to Destiny and Warframe but often note how the different UI and mechanics can be frustrating. While the game is beautiful, many reviewers commented on the lack of overall content from the game. The game is considered EA Bioware‘s last hurrah as Mass Effect Andromeda sold and reviewed below the company’s goal. Unfortunately, Anthem has been having many glitches within the game; specifically the PlayStation 4 version.

Someone put together one of those stupid game of the year images for Anthem and it's fucking killing my sides. pic.twitter.com/aqpxtc6kbt

We’re aware of a crashing issue some of you have been reporting for #AnthemGame. We’re investigating and ask that you share your crash data reports when prompted. If you have, we’ll be reaching out to gather info; if not, please reply to this thread on AHQ:https://t.co/36P21YFjYL

PlayStation has offered refunds for players who purchased the digital copy of the game. You can reach out to PlayStation support to request a refund. Many people have noted there was no hassle. PlayStation usually doesn’t offer refunds for digital purchases.

It’s unfortunate that Bioware is tied to a lackluster game launch. A lot of people believe the game was rushed out to meet the quarter end. Considering the studio worked on such massive franchises like Knight of the Old Republic, Jade Empire, and Mass Effect, it’s disappointing to see their game fail to meet player’s standards.

What are your opinions on Anthem? 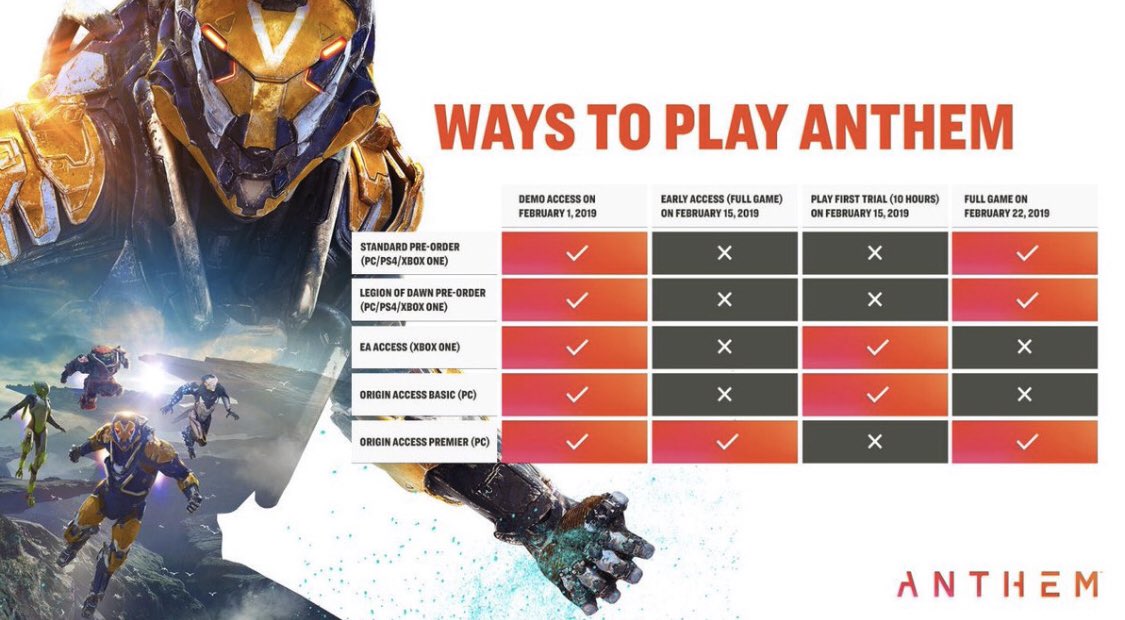 After writing my previous article, I realized how many options there were to play Anthem. At least EA is telling people in a easier fashion.

Anthem is EA Bioware’s new first-person RPG shooter title. It’ll launch on February 22nd, 2019 and everyone is curious to see if Bioware still has the skills to make excellent RPG’s similar to their old titles like Knights of the Old Republic and Mass Effect. To participate in the demo or play early, there are several different dates. 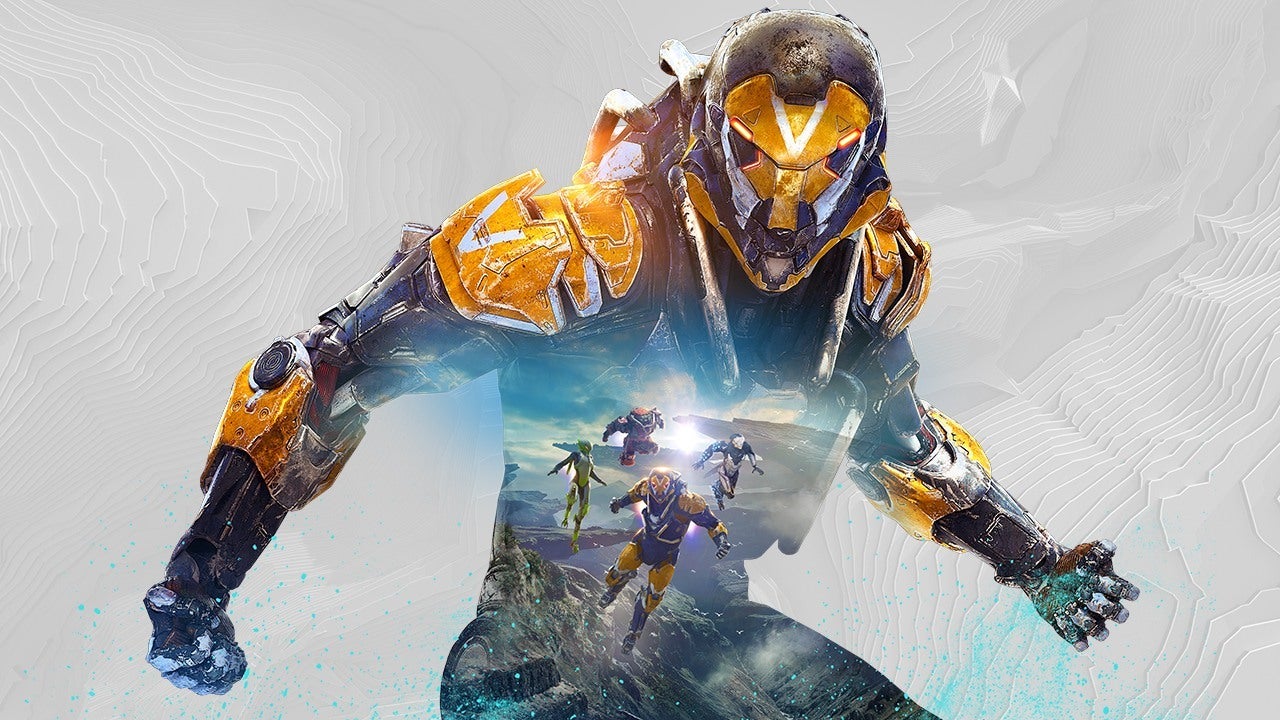 The demo hasn’t been clarified what it will include. EA Access and Origin access cost $4.99 per month. It is only available for 3 days

This is only for PC players but you’ll have full access a week before everyone else. Premier is $14.99 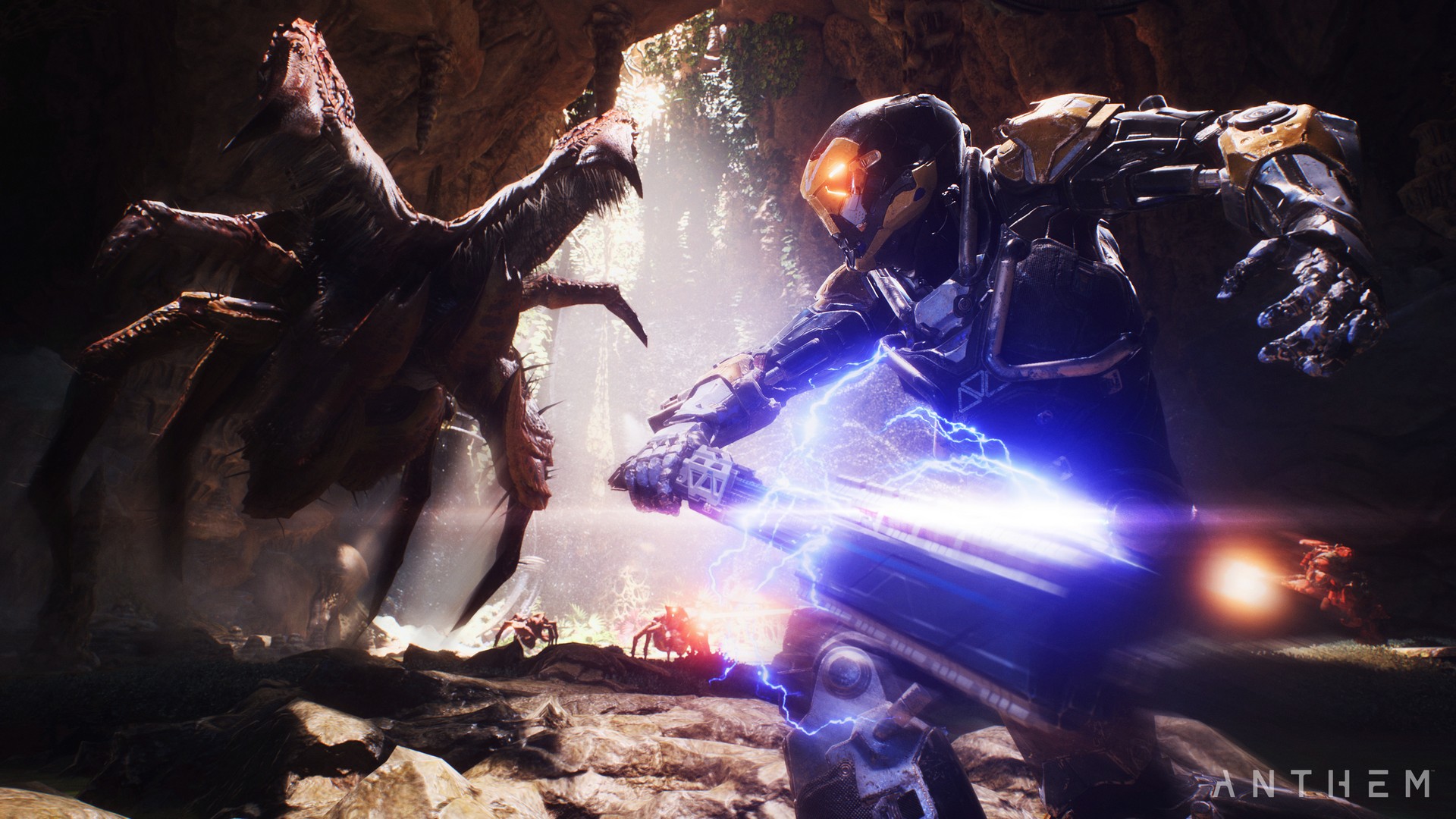 Xbone and PC players will have access for 10 hours if they have EA or Origin Access Basic.